Aqueduct has a very nice card on Saturday with a strong sequence in the late pick-4. Let’s take a look.

This race also features a Godolphin son of Life Is Sweet (by Tapit) for Kiaran McLaughlin, #9 Labeq (8/1) and #1a Vino Rosso (4/1) for Todd Pletcher, a first-time starting son of Curlin.

Race 7 – This is a challenging two-other-than going 8.5 furlongs on the grass. We’ll spread out a bit but our top pick is #9 Cloontia (6/1). He ran last time against NY-bred stakes company but was in the uncomfortable position of chasing Black Tide, who is tough on the lead and wired the field. Cloontia faded a bit late. His previous races are very good including a third to Grade-1 winner Annals of Time the last time he was in this condition.

#3 Tathqeef (10/1) disappointed last time, but two-back was very good with a wide trip behind the inside-out winner Profiteer at Saratoga. That he returns so quickly after a terrible performance last time leads you to believe that something went wrong and that effort can be forgiven.

Cloontia and Tathqeef are our two main horses but we will also use a few deep closers that could win if the pace gets hot – #10 Classic Covey (3/1) and  #7 Toughest ‘Ombre (12/1).  Finally, out of respect to Jason Servis, we’ll toss in #5 Slim Shadey (5/1), who is in form but has been facing weaker.

Race 8 – Red Smith Stakes – #3 Get Jets (6/1) stretches out to 11 furlongs for the first time and he is by Scat Daddy, but we’ll let him beat us in favor of more season turf marathoners. The horse to beat is #2 Money Multiplier (5/2), who didn’t run well in the Turf Classic last time but did in the Sword Dancer two-back. We’re also using #12 Messi (10/1), who ran well behind a slow pace three-back at Saratoga, should have won the Northern Dancer two-back but got buried inside, and then last time caught very soft turf he didn’t like in the Canadian International, a race that can be tossed. He probably has to improve, but his form is strongly hidden.

#10 Call Provision (5/1) was an easy winner when stretched back out last time and is 3-3 at Aqueduct (what is now the inner-turf). #5 Oscar Nominated (8/1) has had a solid year but I think he’ll be shorter than his morning line and this is a better field than any he’s beaten in the last two years. #9 Hunter O’Riley (4/1) ran two good races over the very firm Saratoga turf, missed the Turf Classic, and our one concern is how he handles the lusher Aqueduct turf.

Race 9 – This is a state-bred $25k maiden claimer, so it pays to be careful, but if #3 Mydadfloyd (7/2) runs either of his two dirt races, he’s probably the winner. #6 Thenameescapesme (6/1) goes turf to dirt after three turf races but is half to some dirt winners and the dam was a dirt winner, so it seems like a move that could work out in a weak field. We’ll also use #8 Dooley (8/1) who has run once on dirt, going long against better. 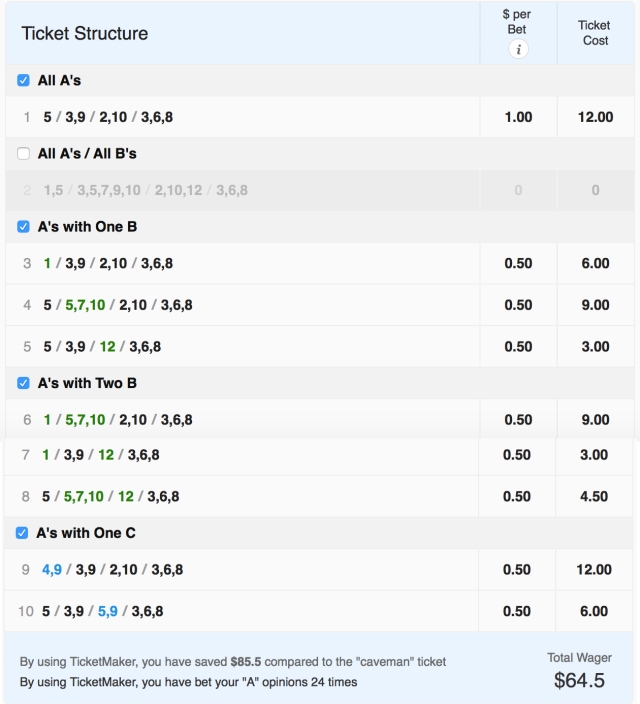 Like Loading...
This entry was posted in Multi-Race Ticket Strategy and tagged aqueduct, multi-race tickets, pick-4. Bookmark the permalink.